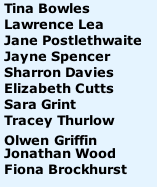 and rapidly transferred to London during the same year. This is hardly surprising because nearly 200 years

later, it remains an escapist delight and was well chosen by The Guildford Opera Company for its 2012 production

at The Electric Theatre. It has a romance and enviable lightness of touch. Yes, one has to suspend

belief on occasions as the story line unfolds but Bellini’s score possesses a magic that encourages this,

Set in an isolated Italian village the inhabitants are wary of a local apparition that wanders after dark, we

discover it is the beautiful Amina (Eleanor Ross) who sleepwalks. Amino is betrothed to rugged Elvino (Yuri

by the Guildford Opera Chorus.

There are inevitably sub-plots with jealous tension from Amina’s love rival, Lisa. Of course, everything is

happily resolved by the end of the evening, even if Lisa (a spirited interpretation by Letitia Perry) hasn’t got

effect that soars into the auditorium and in La Sonnambula that impact is continued.

spread around the set, disguising the imbalance of men to women.

and a voice that thrilled and filled the theatre.”

“Vincenzo Bellini’s opera The Sleepwalker is a pastoral love story with intriguing twists, it was first premiered at the TeatroCarcano Milan in March 1831. Eleanor Ross (Amina) and Yuri Sabatini (Elvino) as the betrothed lovers did justice to Bellini’s arias and well supported by Letitia Perry (Lisa) as Elvino’s former lover. Letitia’s acting abilities were well displayed as she tried to hide her feelings for her former lover Elvino. James Davis (Count Rodolfo) has played many roles with GOC and did justice to the part. Alison Sutherland (Teresa) and Gary Maslen (Alessio) both contributed to the opera with fine performances. The singing of the chorus members enhanced the production although Stage Director Kevin John’s settings seemed at times to be a little static. Musical Director Francis Griffin brought out the best of the orchestra accompanying the principals and cast. Simple sets with suitable lighting effects. A large audience enjoyed the evening.”