The Tempest, an opera by Joe St Johanser

The Tempest by Shakespeare, using the poetry of the play was the basis for
Joe St. Johanser’s operatic composition which Guildford Opera premiered. Rob Mills design for the scenery cleverly depicted a stormy sea, a giant wave and a sea shore with sand Excellent lighting designed and operated by John Whitehead. Kris Benjafield used costume from the in house wardrobe which was very effective. Specialist costumes by Leslie Griffiths. Clever makeup with especial note of how Richard Arundel (Caliban) was transformed by Louise Walsh. The rich timbre of bass/baritone Tim Baldwin (Prospero) coupled with an excellent stage presence made for an excellent portrayal of the part. Richard Arundel (Caliban) the deformed slave whose powerful baritone and acting enthralled the audience . Anna Loveday, Lizzie Hull, and Leo Shearing as the three Ariel Spirits played their parts well. Helen Semple (Miranda) had a very pleasant voice and was comfortable in her part. Yuri Sabatini (Ferdinand) thrilled the audience with his wonderful tenor voice. Musical direction by Francis Griffin and Stage Direction by Jackie Shearer complemented with a strong cast of excellent singers made for a very enjoyable evening. 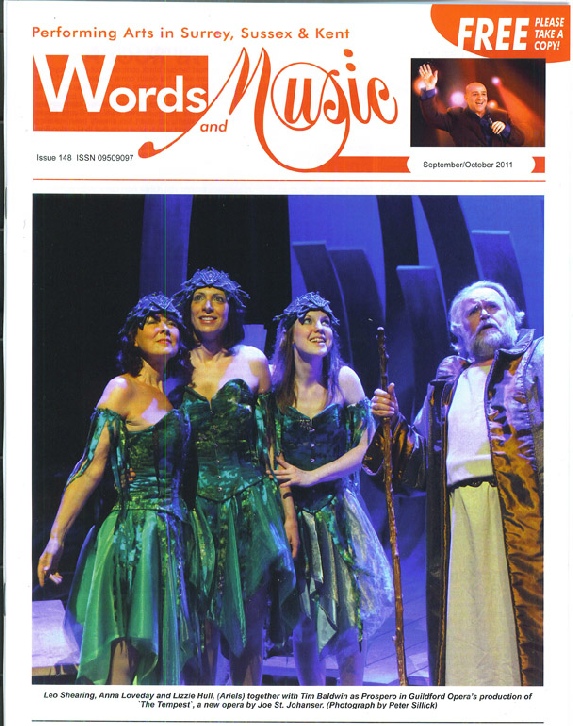 Move mouse over image on the right to reveal the review